The Island of Sicily is the largest and most densely populated island in the Mediterranean Sea. Along with the islands of Egadi, Lipari, Pelagie and Panteleria, Sicily forms an autonomous region of Italy. It’s approximately 100 miles (160 km) from northeast Tunisia, is separated from the Italian mainland by the Strait of Messina and its capital is Palermo. 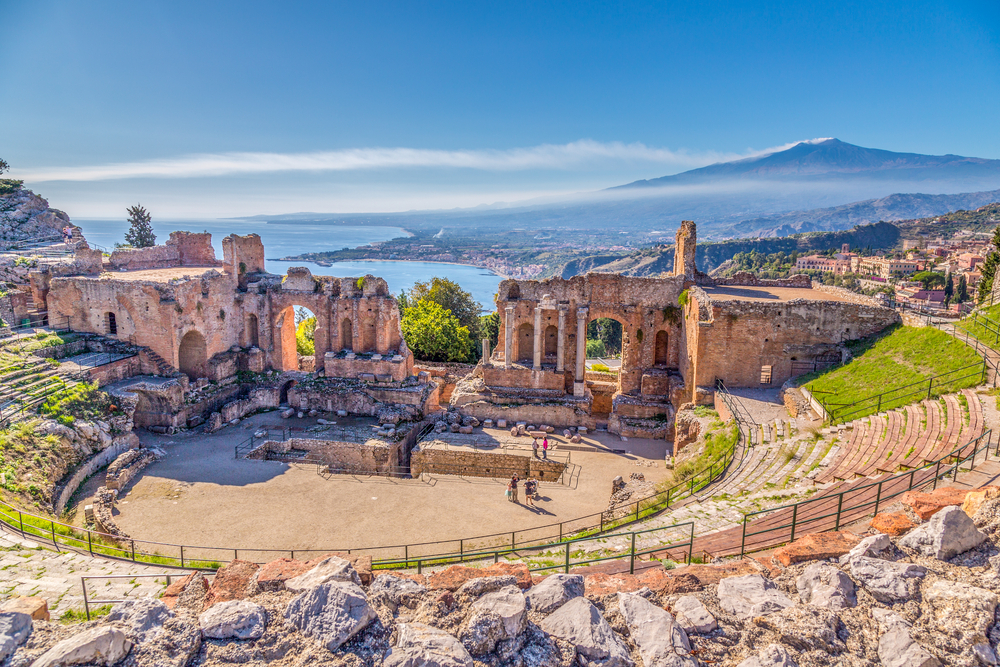 Sicily was inhabited 10,000 years ago. Its strategic location in the center of the Mediterranean has made the island a crossroad of history, a pawn of conquests and empires, and a melting pot for more than a dozen ethnic groups, whose warriors or merchants sought its shores. At the coming of the Greeks, three peoples occupied Sicily: in the east the Siculi, or Sicels, who gave their name to the island but were reputed to be latecomers from Italy; to the west of the Gelas River, the Sicani; and in the extreme west the Elymians, a people to whom a Trojan origin was assigned. There were also Phoenician settlements on the island. The Greeks settled Sicilian towns between the 8th and 6th centuries BCE. The mountainous center remained in the hands of Siculi and Sicani, who were increasingly Hellenized in ideas and material culture. 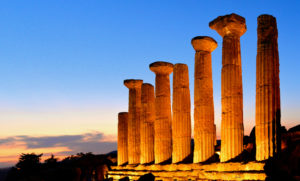 In the 3rd century BCE the island became the first Roman province. The Byzantine general Belisarius occupied Sicily in 535 CE, at the start of hostilities with the Ostrogoths in Italy, and after a short time Sicily came under Byzantine rule. In 965 the island fell to Arab conquest from North Africa, in 1060 to Normans, who progressively Latinized the island. In the 12th and 13th centuries the island formed a part of the Kingdom of the Two Sicilies (or Naples), and in the 18th century Sicily was ruled by the Bourbons. During the 19th century the island was a major center of revolutionary movements: in 1860, as a result of Giuseppe Garibaldi’s revolt, it was liberated from the Bourbons and in the following year it was incorporated into the united kingdom of Italy. In 1947 Sicily gained regional autonomy.

Influence of the peoples who passed through the island can initially be found in the flag of Sicily. Like most flags of the world, the flag of Sicily has always been various changes through time, but its two main elements have been there: the head of Medusa (the myth Greek “Gorgon”) and the so-called “trike”. The Greeks associated this ancient symbol with Sicily during the Magna Grecia period, when they conquered the island and discovered its triangular shape: the three legs stand for the three large capes that mark its edges (Greek “tri”, three, and “akra” , limb): Lilybaeum (Western cape), Pelorus (Eastern cape), Pachinus (Southern cape). 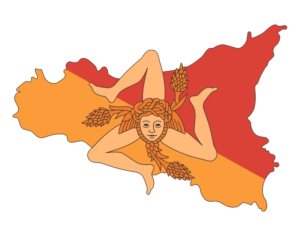 The flag of Sicily was first adopted during the huge Sicilian Vespers revolution against King Charles Ist, with the colors of red and yellow, still used nowadays and symbolizing the union of Palermo (the capital of the island) and Corleone (once an important agricultural center of the countryside), the first districts to join their forces during the fight against the king.

According to the evidence, the Greeks first used wheat ears to illustrate the prosperity of the Sicilian territory; when the Romans invaded the island, they used grain ears to underline its status of “Barn of Rome”. During the Sicilian Vespers the Greek version had been used, as the Roman version was perceived though as a statement of submission.

Sicilian cuisine also shows traces of all these cultures, which have existed or coexisted on the island for the last two millennia. Although its cuisine has a lot in common with Italian cuisine, Sicilian food is also strongly influenced by the Greeks, Spaniards, French and Arabs. The origins of Sicilian cuisine are filled with stories of the Greek colony of Syracuse, landing on the far southern coast of Sicily. On these lush, uncultivated lands were the first whispers of foods like grapes, figs, pomegranates, wheat, walnuts, and hazelnuts. The Sicilian landscape has produced endless amounts of these sweet aromas – succulent, diverse flavors and endless miles of golden beaches only to be found along the Mediterranean’s coastal landscape. That, and so much more, is responsible for creating the magical landscape of Sicily. Untouched archaeological sites, towering volcanoes, and miles of farmland, Sicily may just have it all — particularly when it comes to tantalizing food. Arab influences on Sicilian cuisine trace to the Arab domination of Sicily in the 10th and 11th centuries, and include the use of apricots, sugar, citrus, sweet melons, rice, saffron, raisins, nutmeg, clove, pepper, pine nuts and cinnamon. Norman influences are also found, such as in the fondness for meat dishes. The Jewish community, who lived in the island, also left their mark on the Sicilian cuisine, they were responsible for introducing garlic fried in olive oil into the sauce. Later, the Spanish introduced numerous items from the New World, including cocoa, maize, peppers, turkey, and tomatoes, along with other produce. Catania, on the east coast, was initially settled by Greek colonists, who left a preference for fish, olives, broad beans, pistachios, and fresh vegetables. Much of the island’s cuisine encourages the use of fresh vegetables such as eggplant, peppers, and tomatoes, and fish such as tuna, sea bream, sea bass, cuttlefish, and swordfish. In Trapani in the extreme western corner of the island, North African influences are clear in the use of couscous. 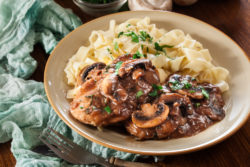 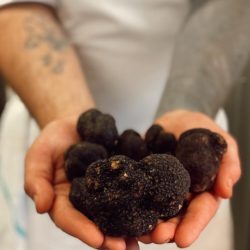 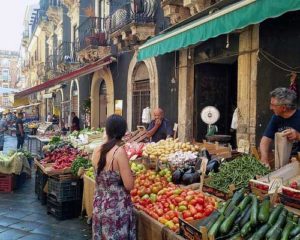 Sicily is blessed with a naturally warm climate; warm enough in fact to provide an abundance of simple yet incredibly fresh ingredients. With a culture strongly dedicated to maintaining the integrity of the land, vineyards of orange and lemon groves, almond trees and olive farms can be found in every corner of the island, carefully preserved by local farmers and their families.

Well-known for their dedication to tradition, Sicilian men and women work to preserve the quality and seasonality of their ingredients — the key to almost any special Sicilian dish is simplicity. Simplicity, now more than ever, is the true artform in local cuisine. Simplicity ensures unrefined ingredients, so honest and clean that they preserve the flavor of the very land where they were grown.

Over the years, Sicily’s local markets have produced a diverse variety of fresh fruits and vegetables that continue to contribute to the exceptional local cuisine. This, along with the carefully preserved culture, is one of the most intriguing and exciting attractions for tourists worldwide. While the focus on locally grown ingredients is hugely important to the cultural influences on food, Sicilian cuisine also draws from some international influences. Locals expertly combine the rich Italian traditions of homemade pasta and fresh tomato sauce with local products of the island tradition. Foods like red chilies, fresh caught tuna and swordfish, green olives, pine nuts and capers are plentiful on the tables of traditional Sicilian meals.

There are still local favorites that grace almost every table at mealtime, including Caponata, one of the most famous and popular Sicilian appetizers. Historically, it was served as a single dish today accompanied by fresh baked bread but is more often prepared as a side dish. Caponata is a mixture of fried vegetables including eggplant, peppers, zucchini and topped with tomato sauce, celery, onion, olives, and capers in a sweet or olive oil sauce. La Fontana Siciliana has Caponata as one of its most appreciated Specials.

Another classic dish, Pasta alla Norma, present on our menu, is perhaps one of Sicily’s most famous pasta dishes. Still grounded in simplicity and fresh ingredients, pasta with eggplant is tossed in a light tomato sauce and served with ricotta salata. This dish, commonly found in Catania, the second largest city of the island, is a local favorite in the summer when eggplant is in season.

We cannot forget the traditional Pasta com le Sarde, prepared with fresh sardines or preserved in olive oil, or even the Spaghetti alla Siracusana, from the city of Syracuse, made with a combination of spaghetti pasta, eggplants, tomatoes, bell peppers, olives, capers, which may or may not include anchovies as well. 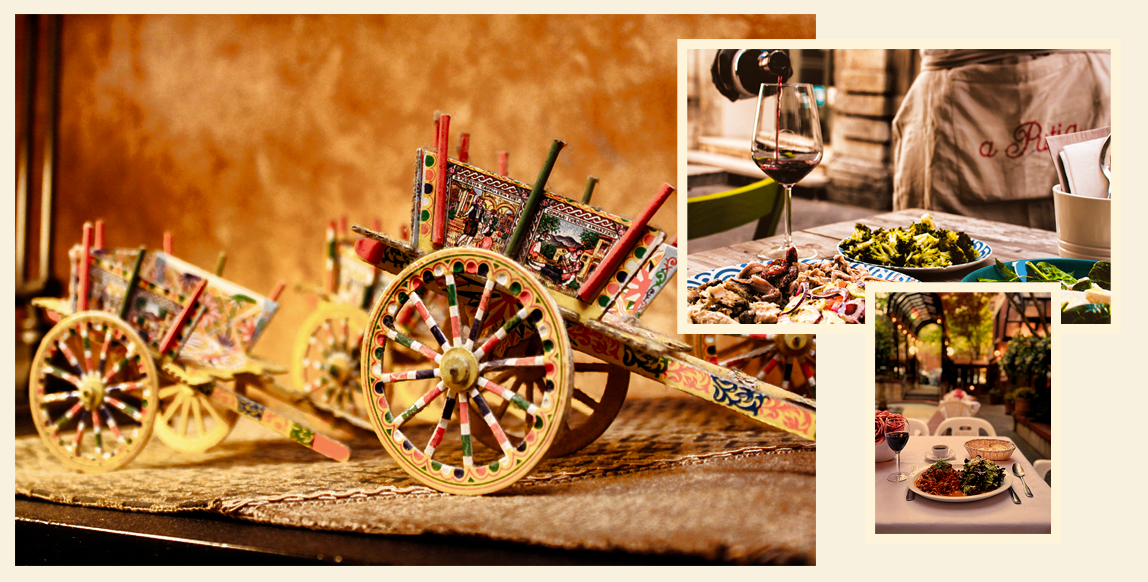 The Romans brought to the island a strong involvement of the Sicilian population with wine production and one of the most traditional wines produced in Sicily today is Marsala Wine. Unlike other wines produced in the region that have a millenary history, Marsala had its production started probably 300 years ago, due to a strong influence from the English. A unique wine, produced exclusively with indigenous varietals and according to a complex production process, Marsala is a fortified wine used as a dessert wine or for cooking. One of Sicily’s traditional dishes, Pollo Marsala (Chicken Marsala), is one of the restaurant’s best sellers today. 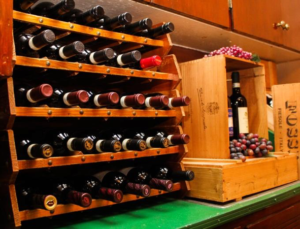 Wine production has become one of the mainstays of the Sicilian economy and is currently the fourth largest wine producing region in Italy. Interestingly, Sicily produces more wines than famous regions, such as Lombardy, Piedmont and Tuscany, and Sicilian wine has gained great prominence in the international community because of its quality, the process of professionalization and internationalization of the local production houses and mainly for the versatility of the indigenous Sicilian varietals. Nero D’Avola, Nerello Mascalese, Nerello Cappuccio, Perricone or Frappato are some of the grapes found there.

The La Fontana Siciliana’s wine list brings some excellent options of Sicilian wines, produced with local varietals and following regulations provided for their respective DOCs, DOCGs or IGTs / IGPs, coming from the largest and most famous local production houses, such as Donnafugata, Tasca d’Almerita or Tornatore. Taste one of our Sicilian wines and be surprised by the versatility and quality, as well as pairing perfectly with the dishes the restaurant brings you.